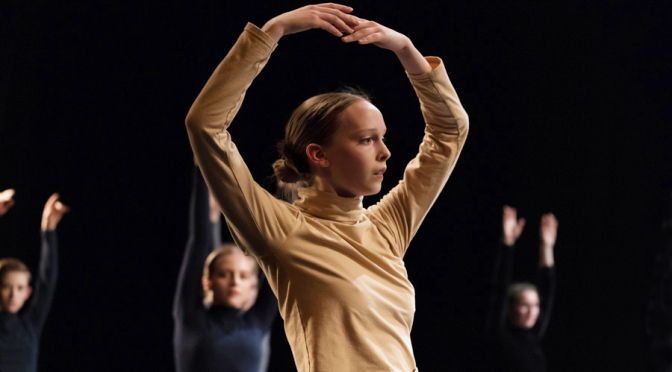 A scene from "steps." Photo by Chris Wong

Choreographers: Sarah Wong and Adrian Maxwell-Campagna
Choreographic Assistant: Kierra Kelp
Title: “steps”
Program Notes/Description: A world tilted off its axis. The possibilities of the impossible, complex systems, natural disorder. Me and you. Us and them. The pieces that make the whole.

Tell us about yourself.

Adrian: I’m originally from Ottawa. I started dancing when I was 16, in 2011. For a couple of years after high school, I went to the training program at the school of Toronto Dance Theatre and that got me thinking more about dance as a career. At first, I was so new to dance, but after those couple of years I learned a little bit more about what dance was, but it still felt pretty fresh, which was why I felt I needed a little bit more and there was a whole lot that I really didn’t know.

Sarah: I’m from Vancouver, and I’ve been at Arts Umbrella pretty much my whole life — almost 14 years now. So, it’s the only dance school I’ve ever gone to and it was the place my parents put me in when I was young. My brother and I also did art classes at Arts Umbrella, so it was convenient to do all of the things at the same place, so I feel pretty lucky that I ended up here at such a young age and just kept going. I was never really sure if I was going to do the grad program. For a while I thought that I was just going to go to university, but I just kept going and now here I am.

Adrian: We had them make little systems with each other. We played around with different systems at different points in the piece, and how they changed …

Sarah: … and ways of communicating the systems to each other.

They were building a world, and within that world there is this structure?

Sarah: Yes, exactly. Within the world there is conflict and tension …

Adrian: … and we focused in on how there is that world, but also we’ve taken an individual from that world to see how they affect the world around them…

Sarah: … someone who wants to branch off, but also wants to influence the group to come along, and then they aren’t sure if they should do that or not.

Sarah: We made a lot of the movement without music at first. We had an idea of what kind of music we wanted, but we hadn’t found anything that really suited the piece, so we made a lot of it without music and more based on our ideas. Costumes too, have been last minute, and we’re still working it out. We started by just improvising together and trying to make a phrase out of that.

How much did your dancers contribute or did you come into the studio with your ideas?

Adrian: We did a bit of both, especially in the first section of our piece — it’s very much what they’ve given to us and then we would try different things out on them and we got them to make up some of their own material and we took stuff from that and elaborated on it.

Sarah: Because of our concept being “impossible tasks” we liked seeing how they dealt with that.

Adrian: It will be interesting to see what it looks like when it has lights and costumes and see if that changes anything from what we originally thought.

Sarah: I’m excited to see it from a distance as well. When we’re working in the studio, we’re so close up, so it will be interesting.

Adrian: It was cool when we had a sit-down talk with her, to hear what she saw in our piece, and she asked us questions which sometimes stumped us. We learned to really be aware of what the audience would see and not get stuck — we might do something that works in our heads, but then we should discuss and question all aspects of it to make sure that someone who doesn’t know who we are will get what we want them to get. So, it was really cool just hearing her ask those questions — all that she’d written down made me think, ‘Wow! She’s incredible.’

Sarah: She’s so thoughtful and very curious. It made us think of a lot of things, and realize, if I actually have no answer for that, we should probably figure it out. The questions would lead to more questions, but also things got figured out along the way, as well. It’s nice to see how the research always continues.

Final Question (post-performance): How did the show at the Dance Centre affect you? What did you learn from taking your piece onto a stage?

Sarah: The final show was one of the biggest highlights of my life. It was so incredible to see everything come together, not just for my piece but for all the choreographers and performers involved. Everyone showed their work with such honesty and courage and the love, care, and passion behind it all showed so clearly. I feel so grateful to be a part of such a generous community. Especially for our piece, it gave me so much joy to watch my dancers be so present in experiencing the work on stage. I realized how important it was to set an atmosphere starting from rehearsal that would allow them to do that. It was exciting to be able to light it, though I was quite lost as to how to approach it because it was so new to me. I was thankful to be able to rely on Adrian while we were setting the lights in the booth as he has previous experience with lighting choreography. This entire process has been life changing and I know I will carry this experience with me far into the future. I wish I could relive it over and over again!