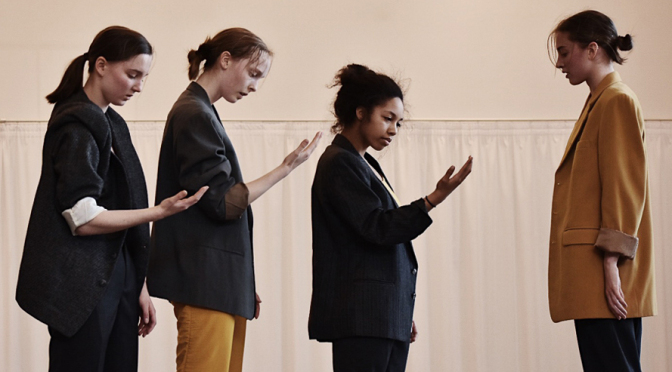 A scene from rehearsals of "Case Study" by Madeleine Gilbert and Zenon Zubyk. Photo by Meilyn Kennedy

Choreographers: Madeleine Gilbert and Zenon Zubyk
Title: “Case Study”
Program Notes/Description:
“…I met a woman
She had a mouth like yours, she knew your life
She knew your devils and your deeds and she said:
“Go to him
Stay with him if you can
But be prepared to bleed…”
—Joni Mitchell

Tell us about yourself:

Zenon: I’m originally from Toronto. I was born there and grew up there. I started dancing when I was 11, in a competitive studio and that was pretty much my training all through my elementary and high school years. We did a wide variety of styles from hip-hop to tap and jazz, all that stuff. One of my really good friends, Kyle Clarke [now with NDT 2], from the studio I was training at, came out here and got accepted to the program. I heard really wonderful things from him and I decided I would audition when the time came around — a year after he came. I took a year off after high school and worked at the studio I trained at to make some money. I taught a bunch of different dance styles, and after that year, I auditioned and came to Vancouver and started at Arts Umbrella.

Madeleine: I started dancing when I was three and I started at Arts Umbrella when I was 15, in Grade 10, so this year is my fifth year. I’m 19 and from North Vancouver.

Madeleine: Some of the themes we’ve been playing with and the ideas — they’ve shifted a lot in some ways and not a lot in other ways. Originally, we were really interested in the idea of playing with relationships, and we’ve let go of that in the sense of it being our main driver, but one thing that has stayed and gotten stronger is the idea of male and female. That was one of the first things we talked about. We wanted to play with the idea of female and masculine energies and forces and different aspects of the female and male, and people’s perceptions of that and the fact that I’m female and he’s male and we have a cast of all women … playing with that and seeing what comes from those aspects.

Zenon: It was really a matter of exploring what that means in more ways than one. In terms of physicality: what can the body do when it’s being related to male and female energy, but also what can atmospherically be brought to the room when you discuss male/female energy and how they relate; how they don’t relate; how they can mix; how they clash … all these different points of conflict and points of interest.

Madeleine: Almost like dissecting, for example, the words “female” and “male” and pulling out these different facets, as opposed to saying, “let’s do a piece about women” or “let’s do a piece about men”. It’s more like what happens when we say “female” or “beautiful” or we ask ourselves “what is that” and letting ourselves go on these trips [of exploration]. What does that mean and where can that take us, as opposed to going the more generic route. But also allowing us to explore a generic route, as well.

Zenon: We’re working with a really wonderful cast of four women, and we’re really open to it being a personal experience for them, and I think it’s really beautiful to see how they interpret. Each one of them has such a different interpretation of gender and how that plays a role in life and I think we’re finding it really beautiful to see that come to fruition in the work itself — how they play off each other and use each other’s experiences to move the work forward.

Madeleine: And how they are really willing to experiment. We’ve given them some really absurd tasks, and they’ve been totally willing to just go with our kind of crazy process. We also wanted them to be part of the conversation.

Zenon: Yes, and they’re really part of the creation itself.

Madeleine: We also wanted to bring in improv as an aspect of the process and, as the process has gone on, it’s been a way for us to find moments in their stories, and like anything that is super improv-based, you need to have a good base for the dancers and an open space for them to explore.

Zenon: In terms of music, we’re also very much experimenting, and almost creating our own soundscape. As much as the piece itself varies in terms of emotional states, the music also does the same. It starts out with this very airy soundscape, an openness sort of sound. One day we were sitting in this room in Q7, and there was this piece of plastic and we recorded it being crunched and I actually counted in the crunches (5, 6, 7, 8, crunch). Then I took that audio and we manipulated it a bit so it was much deeper and less recognizable and it’s become a really interesting, obscure sound, and I put that on a loop from the beginning and that fades into a very different selection of music.

Madeleine: As the dancers are jumping from story to story, and state to state, the music is jumping as well, though not necessarily on the same highway as the dancers — as it’s changing, they’re changing, but not necessarily at the same state. There’s definitely tension built [from this].  We both like listening to music and we talked about using and maybe manipulating more recognizable music at the very beginning of our process. One day we discovered we’d both been listening to the same piece of music: “A Case of You” by Joni Mitchell. It encompasses a lot of the theme we’re playing with — female and male and clashing and coming together — her writing is so [full of imagery] and we’re playing with a lot of images.

Madeleine: I think it will be cool to see all the pieces together, even if there isn’t a stamp of “this is it! We’re done with this!” I think we will always see our piece as an exploration, so we’re never going to say, “Aha! We’re done!” But I’m looking forward to seeing it in the space …

Zenon: … and playing with lighting …

Madeleine: … and costumes and how it’s all going to look together. I’m excited to see how all the elements happen at the same time, and how it will change once we get into the theatre, because it’s going to probably change a lot. I’m also looking forward to seeing how people react to it and what they get from it, because even yesterday when we were talking to Crystal it was so exciting to have another person share their opinions.

Zenon: How they experience the work will be really interesting and maybe it will be somewhat different from what we imagined, but that’s also beautiful thing because they’ll have their own interpretation.

Madeleine: Even when you don’t think you have many choices, you have a lot of choices.

Zenon: It’s really taught me to be really open and accepting of the current state of things and really going with and using what’s given in the moment to create, and to be okay with that. To not worry so much about time being a factor or final product, but really investing in the now and really finding moments of beauty and moments of learning in small things.

Final Question (post-performance): How did Thursday’s show at the Dance Centre affect you? What did you learn from taking your piece onto a stage?

Madeleine: I’m not sure if I can completely put into words how much this show meant to me and how much it affected me. I just feel grateful for all the people involved and their dedication, patience, and generosity. We were so lucky to be surrounded by people that we trust and people who trust us (as the choreographers). I remember Crystal mentioning this last year when Arts umbrella was working on “Flight Pattern”, and it was so enlightening to experience it when we were preparing for the show. When you have a group of people working for the service of art, expression, and creativity, true magic can happen, and I believe magic did happen on the stage and behind it.