Stories From school focus to...

From school focus to reading levels – theatre can help 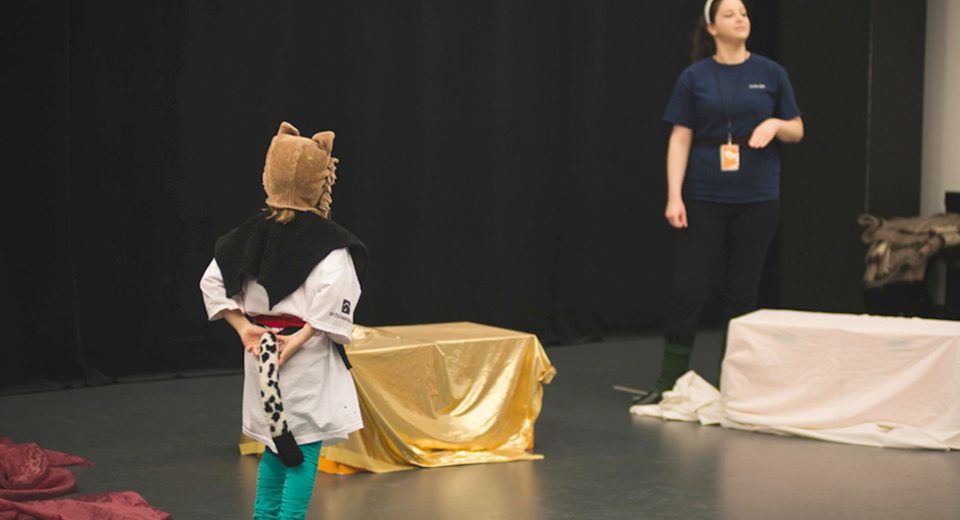 When Katy Geh enrolled her three children at Arts Umbrella South Surrey, she wanted them to experience the arts as her family did. But what she didn’t expect, was that a drama class would make such a wide-reaching impact on her son’s young life.

Dominic, age 7, took his first theatre class, Confidence Through Drama, with Michael Strickland. Katy recalls that for the first time since beginning school and extra-curricular activities, her son’s face lit up.

“There was a twinkle in his eye and a sparkle in his smile,” remarks Katy. “There were no lines, well maybe a few. Dominic could just act. He was so happy.”

She recalls that Dominic played a tourist, wearing a Hawaiian shirt, holding a camera, and a straw hat. “He had his character down.”

Finally, Dominic had found his space – his own space.

To see a child thriving is a special moment for any parent. And for the Geh family, this had been a long journey, as Dominic has been diagnosed with Attention Deficit Hyperactivity Disorder (ADHD).

“The biggest challenge for Dominic is focus,” says Katy. “Your brain is firing in so many different ways. There’s one thing over here, one thing over there. You can’t focus on one thing. The fact that he can do this class is a miracle.”

Katy recalls how Dominic had taken drawing classes elsewhere, but wasn’t able to access the needed focus to succeed in the program. “I had to cancel classes because of conflict with other kids.”

With Arts Umbrella, and the Confidence Through Drama class, “Dominic has been able to find his focus. He has found something he’s good at and enjoys, but he can respect other people doing it. It’s been a real breakthrough.”

One of the important pillars of Arts Umbrella’s Theatre & Music program is respect: learn respect for yourself, learning respect for each other, and learning respect for the environment. Students are encouraged to treat themselves and others in a supportive manner. It’s a simple practice but one that resonates powerfully.

“The increase in focus has allowed Dominic to develop confidence which he was lacking previously,” and Katy attributes this development to theatre classes. “The focus in school has improved since Dominic began Arts Umbrella classes,” shares Katy. “He is no longer frustrated with school. He is caught up in reading and is now reading at his grade level and overall is doing well in school.”

“Dominic has found his outlet in drama class to work in a safe, fun, and creative environment.”

“And he enjoys it, which is the most important part.”