“It’s about the community”: Making connections through Musical Theatre 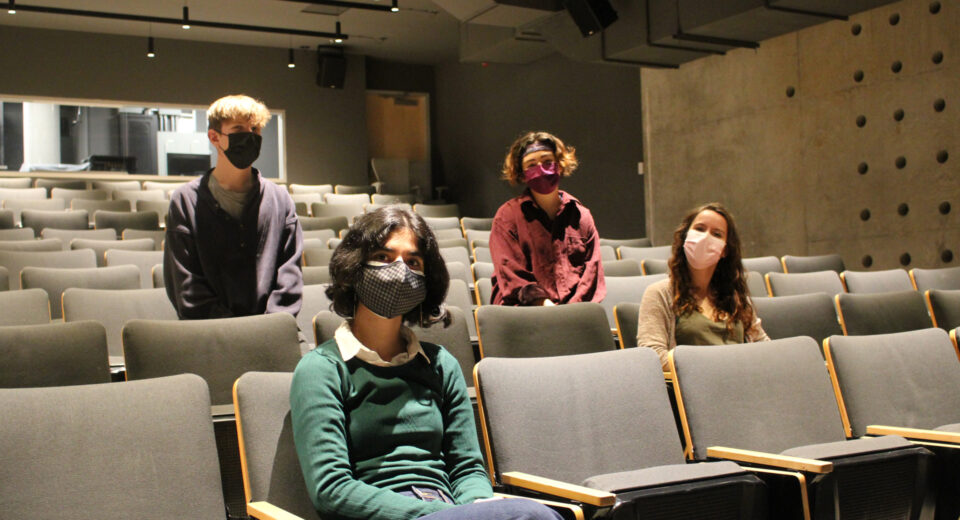 Students work on shows with other aspiring performers throughout the year, all the while increasing their audition repertoire, developing their voice, and learning advanced singing, dancing, and acting techniques.

What is it that makes the faculty and environment so special? We spoke to two recent graduates of our Musical Theatre Troupe to learn more about the experience.

“There were lots of techniques that I learned that helped me with auditioning for theatre school. Things like taking it slow, verbing, being in connection with the other person while they’re saying something. Arts Umbrella really made me feel like either I had these professional techniques or knew about them.

The faculty believed in us. Their trust in our ability to grow really launched me with feeling I had something worthy to give. That is a building block in terms of being a performer, because it’s so difficult to navigate the idea of confidence.

Having these older teachers who are professionals who are in shows in the Lower Mainland, who run theatre companies, say ‘yeah I believe in you, you can do this’ – it’s different from having a peer say that to you. What really stayed with me was how we stayed in contact even after I left Arts Umbrella. I was still coming back to see the shows, if I had any questions that I wanted to know about teaching, they were there to answer all my questions. The teachers care.

Since we have to rehearse three times a week, I really felt like I could spend a lot of time doing this for the rest of my life because I just felt so much joy when I was doing it. When I got to come to rehearsal, when I got to perform with people, when I got to work on a new script.

“I got to meet so many people in the theatre community in Vancouver.”

Musical Theatre is so multidisciplinary in its nature because it’s singing, acting, and dancing. I feel like that really led me to the way I think about multidisciplinary theatre currently. We were taught to take what we do seriously and to go deeper into what we were doing.

The networking was amazing. I got to meet so many people in the theatre community in Vancouver because of Arts Umbrella. Being involved in Smackdown, getting to know people from Awkward Stage Productions. It’s just been expanding since then, because the people who were in that competition were in professional theatre in Vancouver, and I then got to see them and meet them.

Arts Umbrella is about the community. It’s not just the teachers, but it’s about all the other people in all the programs. It’s a connection to that network of artists. Having that community is so essential in something like theatre or performance; it gives you a connection to the people you want to collaborate with.”

“At a young age you get a really good taste of what it is to put on a musical and be in that environment. It’s a really cool experience to see what it takes behind the scenes to make a show work.

The good thing that the Troupe program does is it treats everyone on the same level. So there is a bit of a jump for everyone to refine their technique and to really get what they need out of the training.

The Troupe environment is definitely one where everyone is invited to fail. It is encouraged to fail because – it’s like, don’t be afraid to fail because that’s when you learn. Especially when you have a community around you that supports that type of learning. In Musical Theatre and Theatre in general, to be around some of your best friends and be able to laugh when you make a mistake – that’s in my opinion the best way to get through it. It definitely opens people up to be more empathetic and more open to just life in general, to what’s around us.

“Everyone’s on the same level and everyone’s learning.”

There is a way of looking at things when you’re in the theatre – a way of approaching problems and problem-solving in general. Being able to work so closely with Theatre professionals at Arts Umbrella is a gift for any young person. You’re on an even playing field with everyone. Everyone’s on the same level and everyone’s learning. The students give new experiences and the students take experiences as well.

[Studying at Post-Secondary] clarified how important it was being at Arts Umbrella. Here, they create an environment for people to create their own paths within it, to take what they need from it.

The next editions for the Program take place in September. Learn how you can be there.