Stories From Surrey Dance In...

Last summer, Maurice Kimball was dancing at Arts Umbrella’s Surrey Summer Dance Intensive. This summer, after being selected during a nationwide search, the 14-year-old Langley dancer is performing in his first professional production, Billy Elliot the musical, at the Beck Center for the Arts in Lakewood, OH (near Cleveland). Maurice plays Michael, and is also understudying Billy, the title role.

Like many creative teens, Maurice’s appreciation for music, dance, and performing emerged at a young age.

“We went to a production of Annie,” says his mother Michelle, “when Maurice got home he was bouncing off the walls copying what he had seen.”

The family nurtured his interest in dance by seeking out a movement class, where Maurice turned out to be the only male student. But as luck would have it, there was an all-male ballet class happening at the same time in the same building. The family would often stay to watch the dancers training. “He was only a little guy of 3, but he saw what he could aspire to,” says Michelle.

Maurice and younger brother Patrick (now 10) are both pursuing dance as an extra-curricular. And, as part of their training, they attended Arts Umbrella’s first-ever Surrey Summer Dance Intensive in 2015.

The boys’ Langley dance school, Cameron Dance Academy, recommended the summer intensive to enhance their development as male dancers because the instructors included Ballet BC dancer and Arts Umbrella alumni Christoph Von Riedemann. It’s rare that the boys get to work with a male instructor, says Michelle – “that was the highlight – they don’t often get that opportunity.”

Both boys enjoyed the dance intensive, especially the gregarious movement and the exercises that “got them to explore space and how they move.”

Though girls tend to out-number boys in dance classes, Michelle says her sons think of dance as any other after-school activity. In Patrick’s words: “I have a sport – it’s dance. We do tricks. We do gymnastics.”

Younger brother Patrick is staying with his grandmother in Kentucky while older brother Maurice attends intensive rehearsals for Billy Elliot the musical. Though the family is far away from their Metro Vancouver home, dance is still an important part of their summer routine. As Patrick’s grandmother has said, “I don’t know how I’d get him to sleep otherwise!”

For boys who are interested in trying dance classes, Michelle suggests hip hop as a good entry point, along with tap, where students make music with their feet.

But most of all, starting dance is about nurturing a child’s individual interests. “It is their choice and doing – it has always been their choice,” she says. 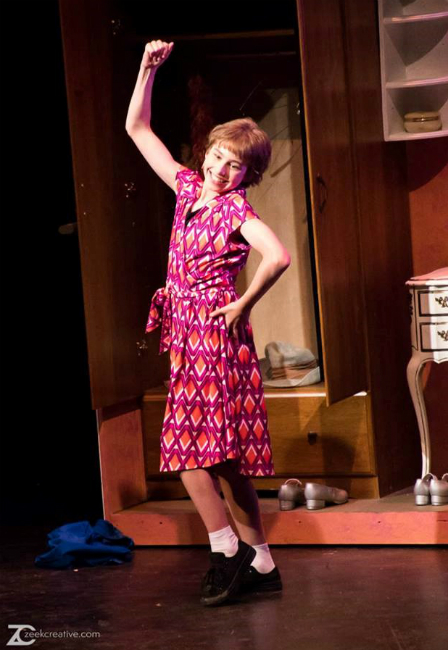 Maurice performing "Express Yourself" in Billy Elliot the musical at the Beck Center for the Arts in Lakewood, OH.