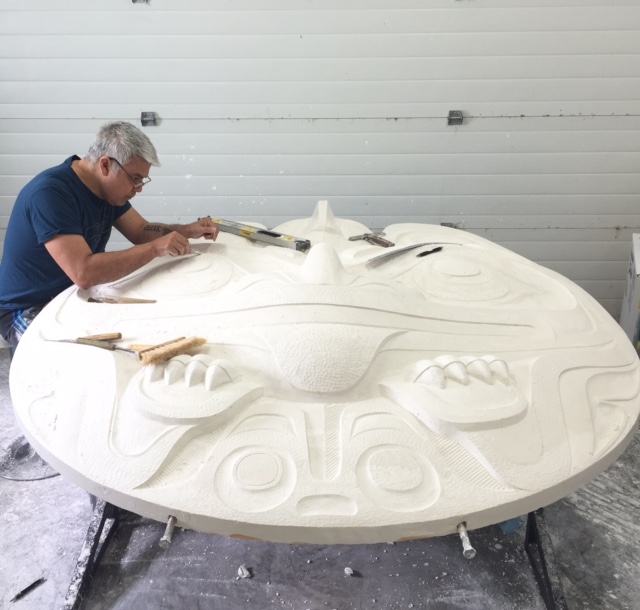 WHEN YOU ASK GALLERIST DOUGLAS REYNOLDS AND ARTIST DON YEOMANS how they met, you get two versions of the same story; they highlight different things. That’s just how memory and storytelling work. And both of these men are storytellers.

Doug is the owner of Douglas Reynolds Gallery on Granville Street. He’s a quick wit and quick to laugh, ready to talk to anyone and share his passions. In subtle contrast, Don is quiet and thoughtful, yet equally quick-witted in a wry-humour sort of way. When Doug mentions that Don designed the metal gate at the entrance of the gallery, Don jokes, “It turns into a prison at night.” “A friendly prison,” quips back Doug.

Today, Don drove in from the Valley to drop off a new panel for the gallerist. Sitting in Doug’s office, we discuss how two met before getting to know more about this year’s Splash contribution. Classical music drifts in from the gallery, where visitors can see an impressive array of Northwest Coast Native Art. 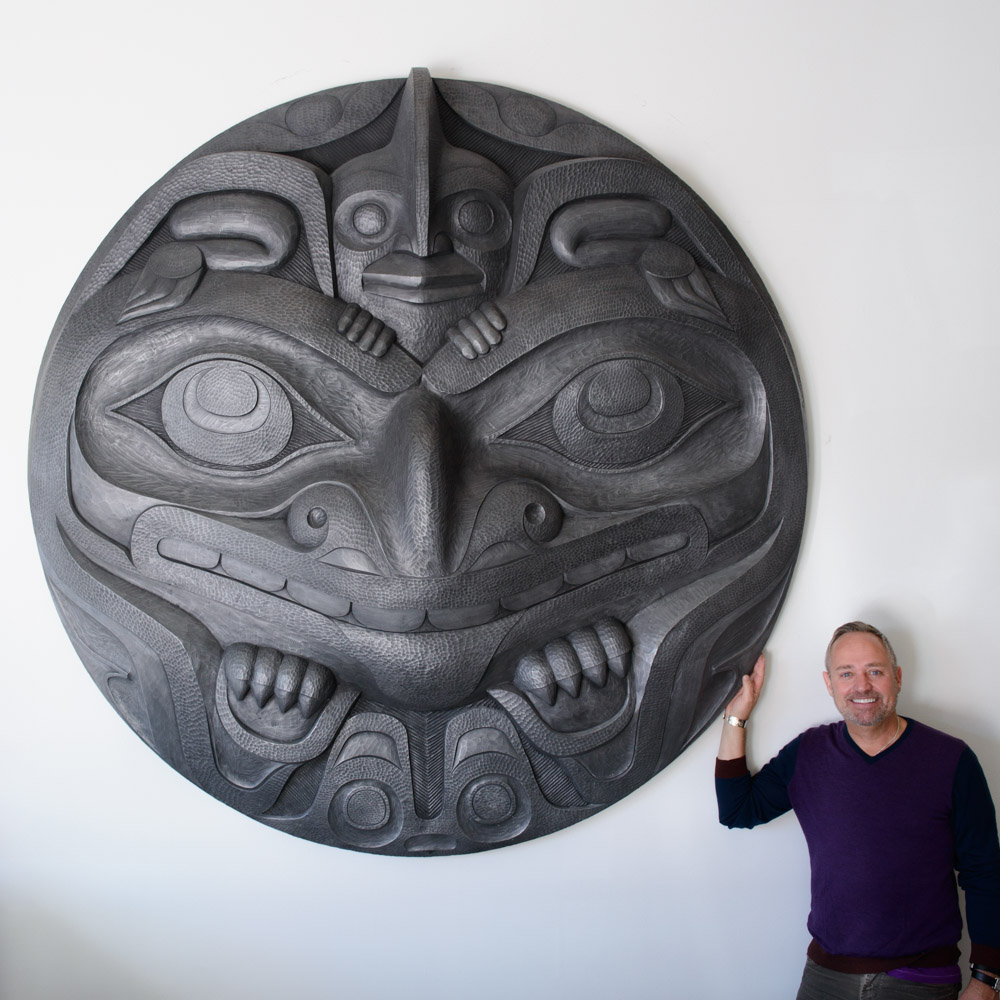 Doug got his first gallery job in the late 80s. He met some of the exhibiting artists, including Don Yeomans, and started spending time with them. Over five years, Doug picked up more and more knowledge of contemporary Northwest Coast art, and then he worked at a non-profit for two years before opening Douglas Reynolds Gallery in 1995.

But Doug didn’t always want to work in galleries. Far from it. “I had the idea that I was going to go into commerce, international trade between Japan and Canada,” he says. “I did my commerce degree at UBC, minor in Japanese, moved to Asia for two years, got my fluency up, and decided it was the last thing I wanted to do for the rest of my life.” Doug was on a plane home five days later. “All of a sudden, I was 24 years old and had never thought of Plan B.”

After working a year in galleries, Doug realized something: he was enjoying his work. So he stuck with it. While Doug admits he knew little about First Nations art when he started, exposure to the art and relationship-building with the artists allowed his knowledge to grow organically. He was friends with Bill Reid’s niece; later, Bill became Doug’s landlord; through Bill, Doug met a lot of other carvers. “With Bill came Jim Hart, and with Jim came Don Yeomans and all the Haida who worked on the big canoe sculpture at the airport,” says Doug.

Don Yeomans grew up in Prince Rupert, where he started carving at just 10 years old. “I took a class with my aunt, Freda Diesing, for about a year,” he says. “It was run by the Native Benevolent Society. In the kids class, I think I had 12 cousins that made up half of the class.”
While Don doesn’t think any of those cousins are carving still today, he’s still at it. “It’s addictive,” he tells me. “It’s satisfying, you know?” Which explains why he stuck with it, even at a time when carving wasn’t really a career. “Back in the 60s and part of the 70s, no one was making a living as a carver, not even Bill Reid—he was still a disk jockey at CBC.”

Don, like many of his contemporaries, doesn’t work solely in wood. Throughout his career, he’s experimented with a range of materials. “It’s kind of a historical thing where a lot of us older guys do a lot of materials; not because we’re versatile and we like to do everything. You just see the trends. For a while everything wood would sell. Then for a period in the 80s people wanted their stuff small and jewellery was big. There are cycles to the market. Being versatile just makes it easier to ride it out.”

A pragmatist, Don says he has no preference for material. “They’re all the same,” he explains. “With the big stuff your sense of time expands; when you do something small, everything contracts.”

Wolf & Moon Panel, Don’s piece for Splash is made from forton, a metal-resin composite. “It was a material used for industrial purposes,” says Doug. “Once it was taken on by the art world, [artists] started working on how to patina and colour it. The advantage is that it gives you the look of bronze without the weight.” 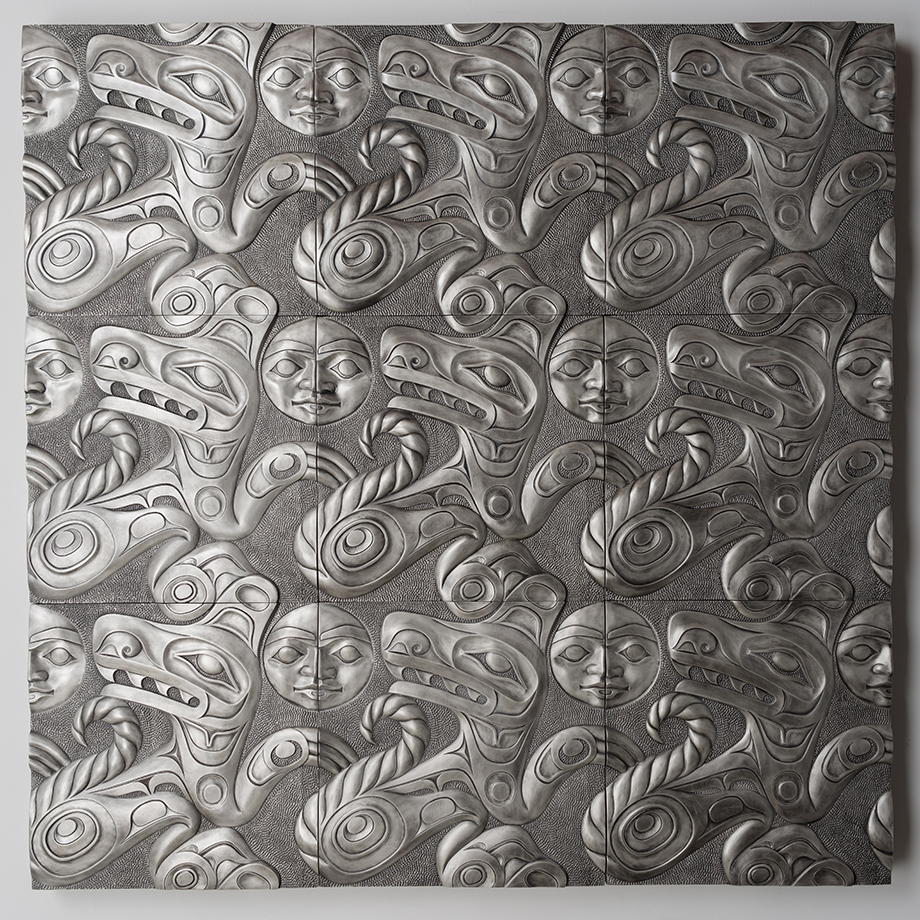 The set of nine panels feature a pattern of wolves and moons. “I don’t do [wolves] very often,” says Don, “but when I depict them, I don’t ever see them as singular animals.” Instead, he views the wolves as a unit, a family, a pack.

Don says his ideas come from observation. “When I was starting out, I took a lot of my ideas from looking at beginner’s work,” he says. “That’s where the creativity is.” Beginners often just don’t have the knowledge of the technology or an understanding of materials. But beginners can be just as creative as the master.

“A lot of good ideas are around you,” says Don. “When I do new stuff, it’s a combination of things I want to say, but then it becomes a dance to make everything work. You get sucked in, you relax your eyes. If your eye stops at one spot, it’s not working, so you have to change it. And so it goes. Keep doing that until your eye just keeps moving.”