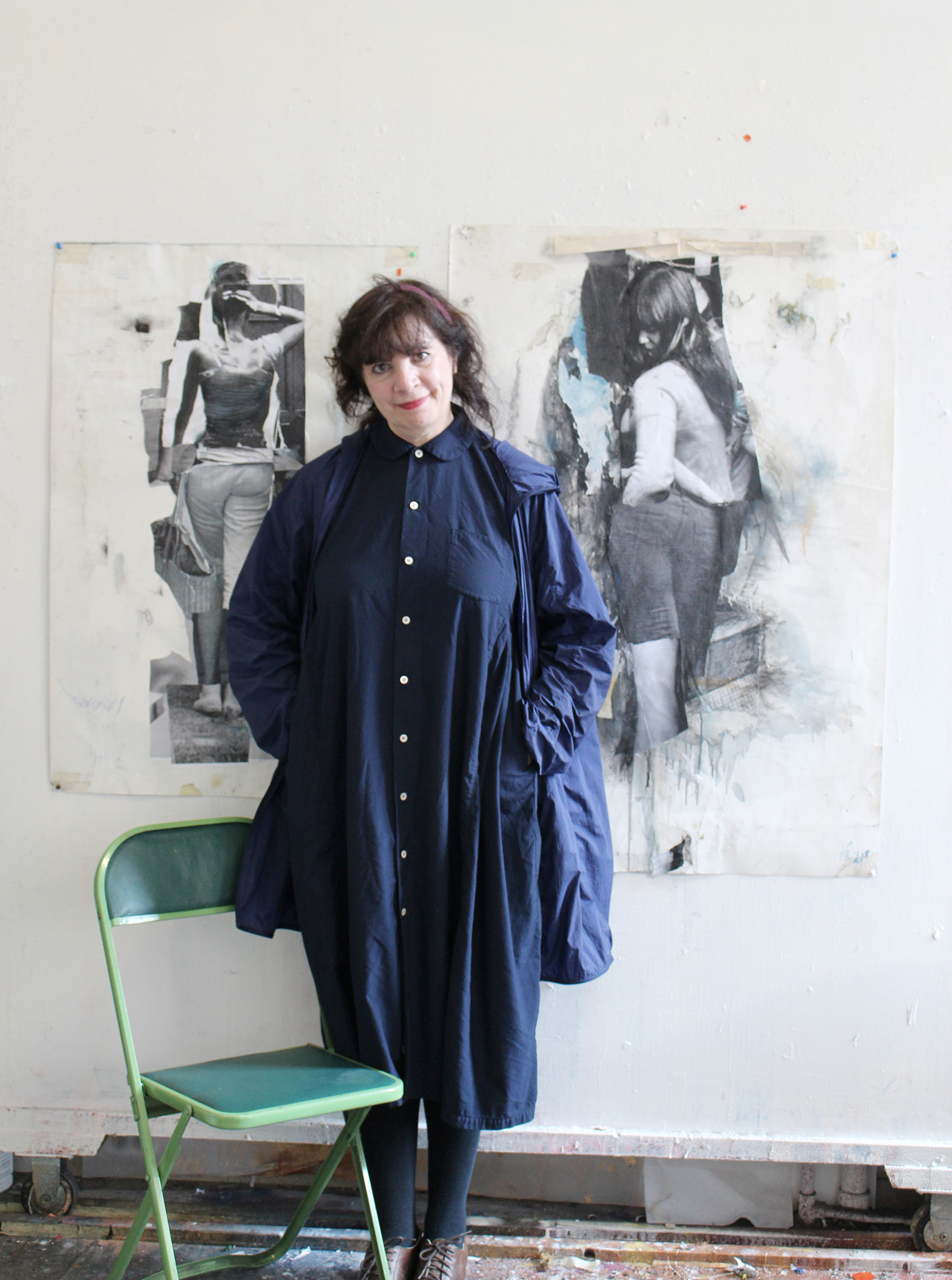 UPON GRADUATING FROM EMILY CARR IN THE 80S, ANGELA GROSSMANN, along with her peers, were taken on by renowned gallerist Diane Farris. Apparently Grossmann knew nothing of commercial galleries. It was pre-internet and art school didn’t teach students how to sell work. On Farris’ recommendation, Grossmann donated to Splash for the first time. She’s been a regular donor ever since.

I spoke to Grossmann at her Gastown studio about her art and process, going on a journey through the eras along the way.

There’s a thread that weaves its way through the decades of Grossmann’s work. A pattern not made of paint, or styles, or themes; it’s in her materials. When she was still in school, Grossmann got a job as a scenic painter in theatre. One of her first days, Grossmann saw her peers tearing down sets from previous shows. “They were big,” she tells me, “huge, four by eight feet, made of wood. And they were almost like ready-made canvases, except they had things on them from they had been used [on set].” Things like wallpaper or a painted living room, faux wood painted on real wood. Back then, the theatres didn’t reuse or recycle sets: “they just threw them in the Smithrite.”

Instead of adding to the trash pile, Grossmann dragged the heavy sets back to her studio and started working on them. “That was the first time that I worked on something that had some other use; that wasn’t fresh paper; that wasn’t stretched canvas; that couldn’t be bought from an art supply shop. I was starting from something that had a history. And from there on, I’ve never worked on anything that didn’t have some sort of history.”

Looking around Grossmann’s studio, I see hundreds of pieces stacked on tables and shelves. Much of her work is facing the wall, hidden from view. But there’s plenty to settle your eyes on: old books, portraits, magazines, and loose papers. A small radio plays in a corner, mixing with sounds from the busy street below, late afternoon sun glaring through the windows.

She stands and rummages through a pile of papers on the table. Over the next 20 minutes, she brings me on a journey through the ages. Portraits from the 1850s—she shows me a piece she’s painted over: “You could see that’s an eye, there’s the head, and I just paint over them. You can create a collision, a new conversation.” Ledgers from the 1910s: “I used to try to work in the month, possibly the day [noted in the ledger].” She has tents from the 40s, used by people who surveyed the North: “They still had hay in them when I got them,” she tells me. Also from the 40s, files and files of mugshots of petty criminals, people who slipped through the cracks of society. She fingers some old clay-based paper and asks me to do the same: “It almost has a ceramic feel to it. It accepts [paint] differently.”

Grossmann treats her source materials with little decorum. She rips and tears: “it’s almost like an excavation,” she says. “If I don’t discover something about the piece, I won’t stay with it. And it doesn’t happen on every piece; it might happen on the sixth, or the first. You keep going until it happens again.” It: that feeling of history, of sensing something from the way the source and the work communicate with one another.

I ask how much the original materials inform her work. “Sometimes it informs it a lot; sometimes I just skirt around it because it’ll get in the way,” she says. But she does try to keep her work ethically pure. When she’s working, hours can slip by without a word spoken, so she talks to herself. She asks herself if the work feels right. “I have dyed-in-the-wool notions about what art can do and what I can do with art,” she muses. “I may not fulfill the idea of what art can do… I haven’t figured that one out. But I do have strong ideas about what I want my art to do: there’s a residue and a feeling behind it; there’s a sense. It isn’t just a picture, there’s also an underlying double exposure.”

While Grossmann admits studio time can be lonesome, she feels part of a community. “When I went to art school, I formed an alliance with a group,” she tells me. “We were always doing things together and there was incredible comfort in having the group. Sometimes when I’m sitting in my studio alone, I realize I haven’t spoken a word in hours—it can be an odd thing. Just knowing that my friend is also sitting in a room doing the same thing is comforting.”

Being a part of that group also keeps Grossmann pushing her art forward. When they were in art school, the dynamic energy between them kept each artist producing. There was a mutual recognition of talent. “A cynic might use the word competitive,” Grossmann says. “But I don’t think so. It was a competitive nature only in ourselves; self-competition.” The group remains friends to this day, texting or emailing daily, sharing work, asking for opinions.

As a long-time Splash donor, Grossmann is part of another community, one that is building a legacy of artists in British Columbia, giving young people an opportunity to find their group and create history.