The “Canadian Caper” – the covert rescue of six American diplomats from Iran in1980 – was an unlikely catalyst in the career of Vancouver artist Thomas Anfield.

He was just 18 years old at the time, and “in Chicago on the way there, I was looking at Henri de Toulouse-Lautrec’s Self-portrait in the crowd, At the Moulin Rouge, and that was it.”

“That was the epiphany.”

But as much as seeing that painting was a pivotal moment, Thomas had always been drawn to the arts.

“Where other kids were good at sports, I was good at drawing,” says the multi-talented artist, whose works cross the boundaries of visual arts, dance, performance, and music.

His grandparents were also strong creative role models (“mythical”, in the artist’s words). Thomas’ grandmother was a floral watercolorist who exhibited at the Vancouver Art Gallery in the 1950s and his grandfather worked in advertising.

“[An artist] was someone who was free to express themselves any way they wanted to.”

But as Thomas’ career has grown and evolved over the past 35 years, so too have his ideas on the role of an artist.

“No one says ‘it’s a small business that you run by yourself’. To raise kids in Vancouver and be an artist, no one does that – that’s amazing!”

He sheds further light on an interesting dichotomy by recalling a trip to Ghana to give a talk. At the event, Thomas remarked to a fellow artist that the fanfare seemed overblown. His colleague simply replied: “The real job of an artist is to appear to live your dreams, so others can keep their dreams alive.”

It’s a powerful statement, and one that elucidates the important roles and responsibilities of artists.

“It’s not about how famous you are, being an artist in society is a political act that has resonance. It’s sacred in my books.”

One of the ways Thomas impacts the community is through sharing his work at Arts Umbrella’s Splash art auction and gala.

“You want the work to get out into the community,” he says. “I want to share my work with as many people as possible.”

For more than a dozen years he’s donated pieces (including Revolutionaries for Splash 2016) that have helped raise funds for Arts Umbrella – supporting high-quality arts programs for young people. It’s a powerful act, and one that truly has resonance in young lives.

“It’s sowing the seeds,” he says. “If you can get art into children’s lives, it’ll be part of their lives forever.” 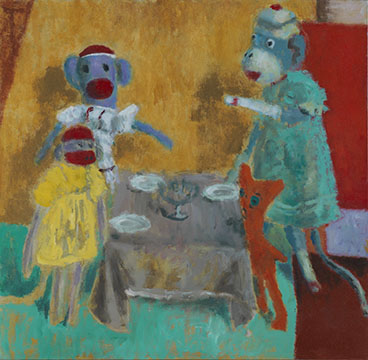