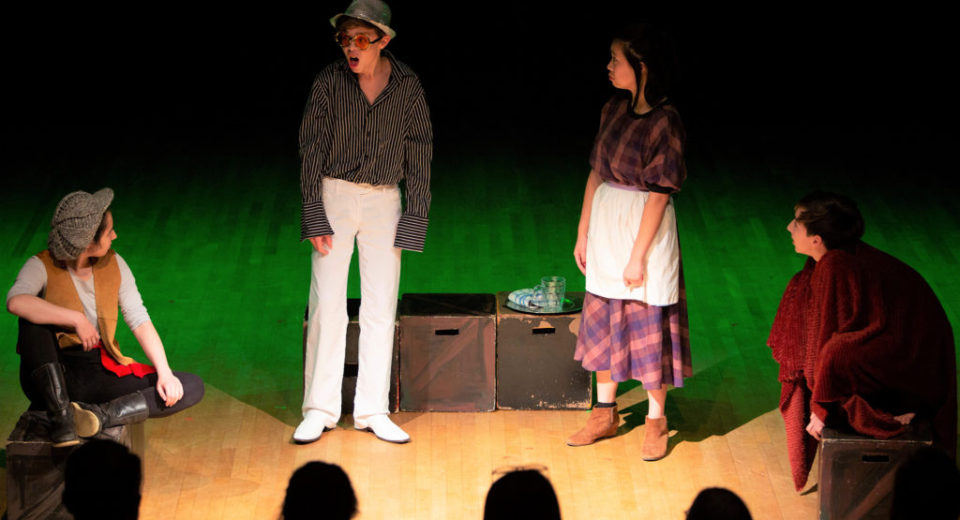 In Fall 2019, Arts Umbrella reintroduced an old favourite back into the Pre-Professional Theatre stream. In previous iterations, Laboratory (Lab) Troupe has always focused on writing in addition to acting and directing, but when Vancouver-based theatre artist and educator Laura McLean was given the opportunity to reinvigorate the program, she wanted to ensure Lab Troupe was responding to the needs of her students.

We talked to Lab Troupe student Duncan Murch about what it’s like to be in the Troupe, writing collaboration, and Beamed Up!

Arts Umbrella: What grade are you in?

AU: Lab Troupe has a focus on writing and acting. Do you enjoy both?

DM: Yeah. Four of us actually did a class last year together, a Theatre Intensive class. And two years ago we did a parody of Stranger Things, which was really fun.

AU: This is a step up then. Is Intensives just once a week?

AU: And this is six.

AU: You do a lot of writing in this class, some of it in collaboration with your peers. Talk us through the process of collaborating.

DM: We’ve been doing different processes all year. We’ve done improv with “who, what, where,” and then trying to make a scene out of that, and then writing it down. We’ve started with character development, like pick a character and then do a scene that evolves round the characters or monologues. We’ve also done free-writing.

For Beamed Up! we decided we wanted to do a five-person scene to close the show at Winter Shorts, because we had extra time because all of our other stuff was under time, so we sat in a circle [in class] and decided on the “where.” Once we got that, we spent the rest of the class choosing our characters, which we did by choosing a centre of movement for the character, and then evolving it around that. After we chose our characters, we improv’d a scene three times, what it would look like, what would happen or come out of that.

Then we quickly wrote down what worked, and Laura told us to go home and write our own drafts of the scene, of what that would look like. Next we’re going to share all of our scenes to find common things that people did, and things that really worked, and then as a group we’ll write a final draft.

AU: Have you collaborated on other writing before or do you normally write on your own?

DM: We did monologues at the start, so that was by ourselves. Then we did two-person scenes, but you wrote the whole thing and then gave the other person their character, so no it wasn’t really collaborating. But then our final scenes that we did, that were improv, we did with a partner and we chose our own characters and stuff.

AU: Tell us about Beamed Up!

DM: We’re five characters from different eras. Hubba is a cave man, Jacques is from the French revolution, Ruby is from the 1920s, Disco Dave from the 70s, and Brendan Rickshaw is a modern hockey player.

We don’t show how, but they all get abducted from their different eras and brought together on this alien spaceship, and they have to try to figure out how to get out, but most of it’s just us talking.

AU: How did you come up with the concept?

AU: It allowed you the freedom to choose a wide variety of characters as well.

DM: You can really take whatever character you want. A caveman for example, who just said ugh and ooh.

AU: How’d you come up with Disco Dave?

AU: Are you looking forward to blocking when you get to figure out your moves?

AU: Is there discussion around what you’ll do for Expressions Festival yet?

AU: You’re blocking this soon, but for Expressions there will be even more to do. Costumes and sets.

DM: She said we have our own costume designer and set designer so that’s pretty cool.

AU: That will be a fun session, figuring that out.

DM: We get to create our own tech too. They show us what the possibilities are, and then we go in. We’re touring in schools so we have to take our own tech to the schools. And they have to teach us how to set it up and stuff. That’ll be pretty fun

Students in Laboratory Troupe collaborate on a full-length play for Expressions Festival in May, 2020. Students will write, act, and produce the show.

Auditions for Laboratory Troupe take place annually. Check our auditions page for the latest schedule and to download your application package.

Read more in our Lab Troupe series:
Introduction to Lab Troupe
In the Studio with Lab Troupe