Stories From geologist to pa...

The path to the easel is not always a typical one – and artist Jeff Wilson demonstrates that not once, but twice over.

The Vancouver-based, Edinburgh-born painter says he went the “opposite route” to becoming an artist. “I did science all through college”, training as a geologist and working for an engineering firm.

But an economic downturn in 2013 made him re-examine his relationship with painting – coming to the conclusion, “if not now, then when.” Jeff has been painting full time ever since.

Though geologist to visual artist seems like a large and unlikely career jump, it’s one that echoes the artist’s family history.

“My Dad was a machinist. He jacked in his job and became an artist,” says Jeff, using the British slang for quitting a job. “My Dad was around artists and trained by a Latvian wood sculptor. So that was always there in the background.”

“When you’re a kid, you don’t think too much about the broad implications of things. You assume everything is going to be fine.”

But in retrospect, the artist can easily put himself in his father’s shoes: “My Dad was scared to do it. He was giving up a well-paying job to do something that he loved.”

“I’m kind of following him,” says Jeff, noting both the uncanny parallels and differences between generations. “As I get older, the more impressive he becomes. I didn’t have to deal with the uncertainty he must have gone through.”

And though Jeff’s professional science background doesn’t appear in his choice of subject matter (often urban landscapes and neon signs, such as Splash 2016 donation “Star Weekly”), the discipline translates to his workday: the scientist-turned-artist spends 9 to 5 in the studio. 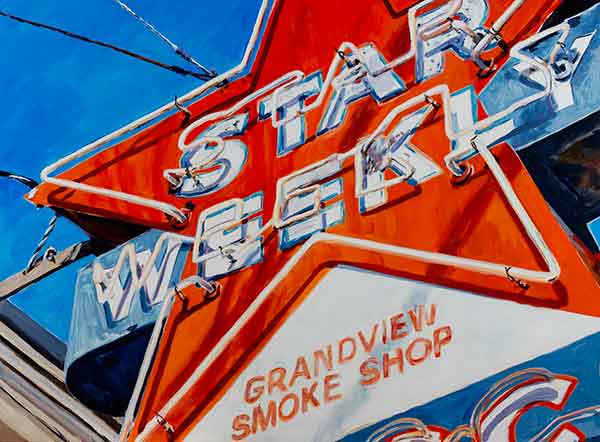 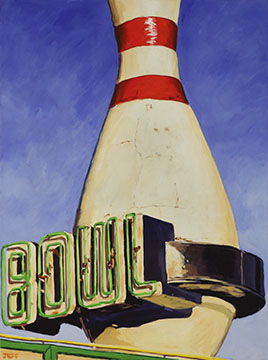