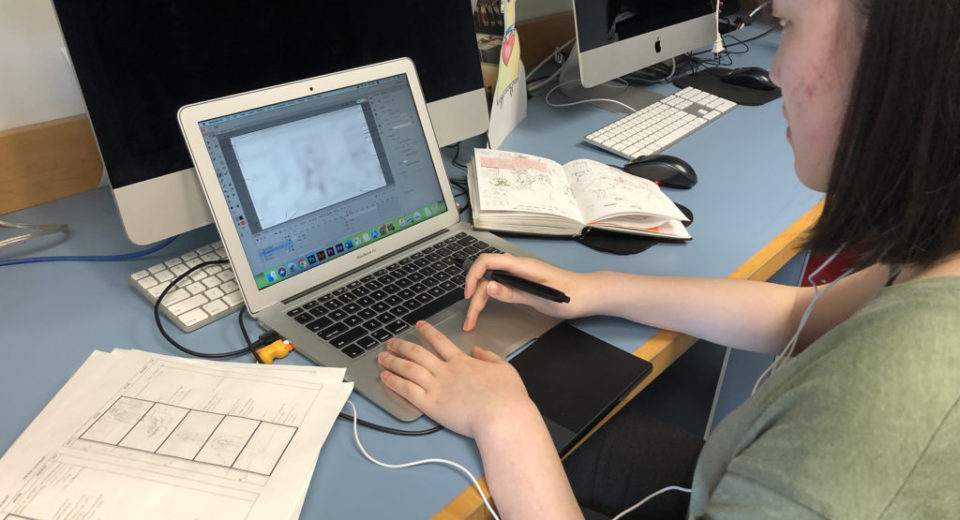 Filmmaking can seem like an intimidating art form at first. There’s so much to consider, from writing a story to filming the scenes, finding the perfect music to editing the film to bring it all together. To help demystify things, we spoke to Arts Umbrella instructor Jocelyn Sanchez about finding inspiration in found footage and how this class breaks down process.

Arts Umbrella (AU): What is found footage and why do you recommend it as a starting point for documentary filmmaking?

Jocelyn Sanchez (JS): Found footage is about collecting and revisiting films or anything that’s captured on film and making it your own. I think it’s a great way for starting off in film. Before I started doing my own film stuff, I did so much experimental work where I would just take footage from elsewhere and remix it.

There are resources—like the internet archive—that have so many films, and to be able to take work, remix it, and put it into your own words is such a great way to introduce yourself to film. Oftentimes, students wonder ‘Where do I start?’ ‘What do I film?’ Being able to take other people’s footage is helpful. Let’s say you wanted to film the Mediterranean ocean. You can’t go there and film it, but there’s one that’s similar to it or you can find it on the web and play with that. You’re able to expand and you’re able to explore.

AU: What skills will students develop in the Documentary Filmmaking Intensive?

JS: Students might start by looking at films. There are so many artists—like contemporary artist Stan Brakhage—who have taken footage from films or they’ve made their own by filming in an unconventional way. Filming something mundane and turning that into something would be a really fun place to start.

Once you get a feel for the genre, you can progress. Students will film and learn the basics of editing and different shots, and apply it to the footage they’ve filmed. Then the class decides on subjects to focus on, using their footage or content from the internet archive.

AU: We also offer film classes through our Theatre department, but this intensive doesn’t require the students to be in front of the camera, giving students an opportunity to learn about some of the other aspects of filmmaking. What else makes this class unique?

JS: It’s accessible, that’s the best part. It’s accessible filmmaking. Instead of everyone going out and filming the same thing and trying to make that into a film, we can look at all this footage that we have access to, and turn it into something that each individual has visualized.

It also brings in the element of sound, and that is such a huge component to experimental film or film in general. How sound can impact a film is a fascinating topic, so we can discuss what the message behind a sound or what it makes you feel?

The class will also have a mini critique after the project to talk about how the works make them feel and what elements could have been brought it. Just have a conversation about what they’re making.

AU: Like joining a film club, but at Arts Umbrella.

JS: Which can be more comfortable, because everyone wants to be there. It would be really fun to play with and experiment with. Especially because you don’t always get the opportunity to talk about your work.

But the class may also push boundaries, pushing teens to think about art in new ways. It doesn’t have to be cute, it doesn’t have to be pretty. It could be ugly, but we can still being mindful of everyone around us, and know that effects that it could have on someone else—have those conversations. We want everyone to stop and think why are you using this piece of footage? What drew you to it? Why did it make you laugh? What was it about the way they said this? What does it do for you and what do you want it to say to other people?

AU: How do you provide feedback and mentorship?

JS: By asking questions and seeing it from a stranger’s point of view. In a contemporary art environment, you want to create things that create conversation. Otherwise it just becomes any other object. Asking or giving recommendations. ‘Oh this reminds me of this artist, you should look them up or see what else you could do with that.’

Registration for our Documentary Filmmaking Intensive is open now. Learn more and sign up online today!

Jocelyn Sanchez
Jocelyn is a Vancouver-based visual development artist focused on whimsical and dreamy work. A recent MA Animation graduate from the University of South Wales, she is currently working on a variety of 2D/3D projects.