Behind the Scenes with the Cast of Urinetown

We talked to the cast of Urinetown before they hit the stage at Waterfront Theatre to find out what makes them tick. With a love of tea that runs deep, the 17 cast members share their pre-show rituals and snacks, and tell us how they de-stress during a show run.

What is your pre-show ritual?

Vuk Prodanovic (Bobby)
“Lately, my pre-show ritual has been singing “Kiss from a Rose” by Seal as loudly as I can.”

Natalie Dueck (Lockstock, Ensemble)
“I sit in silence and stare at a wall or something that’s really blank or not moving, and just try not to think about anything.”

And then there are the… other rituals.

Paterson How (Cladwell)
“I stand up on my toes as if there’s a cliff face, so that I build up energy and let that sit for a moment, so I have that in me.”

Ace Crowchild (Barrel, Ensemble)
“Getting this blankie that I’ve had since I was a kid and wearing it like a cape and sitting there for a while.”

Jasmine Ashley-Dy (Hot Blades Harry, Ensemble)
“I apply lip balm—vigorously—because I think that if I don’t have chapped lips, I’ll do better somehow.”

It’s a couple of hours till curtain, what do you eat?

There’s a lot of water and tea.

Molly Borritt (Dr. Billeaux, Sally, Ensemble)
“Water or hot tea. If I have them, tic tacs.”

Anna Prentice (Hope, Soupy Sue, Ensemble)
“Pineapples. I will consume half a pineapple throughout the run of a show.”

Olivia Pryce-Digby ((Pennywise, Ensemble)
“I like to eat bananas a lot.”

Vuk Prodanovic (Bobby)
“Any candy any of my cast-mates have.”

And then there’s actual food.

Jasmine Ashley-Dy (Hot Blades Harry, Ensemble)
“Carbs. A lot of bread an hour before and anything with ginger, because I also love ginger.”

Sidney Klips (Assistant Director)
“Salad or sushi or something light. Also a big fan of pineapple because it clears away all the mucous.” 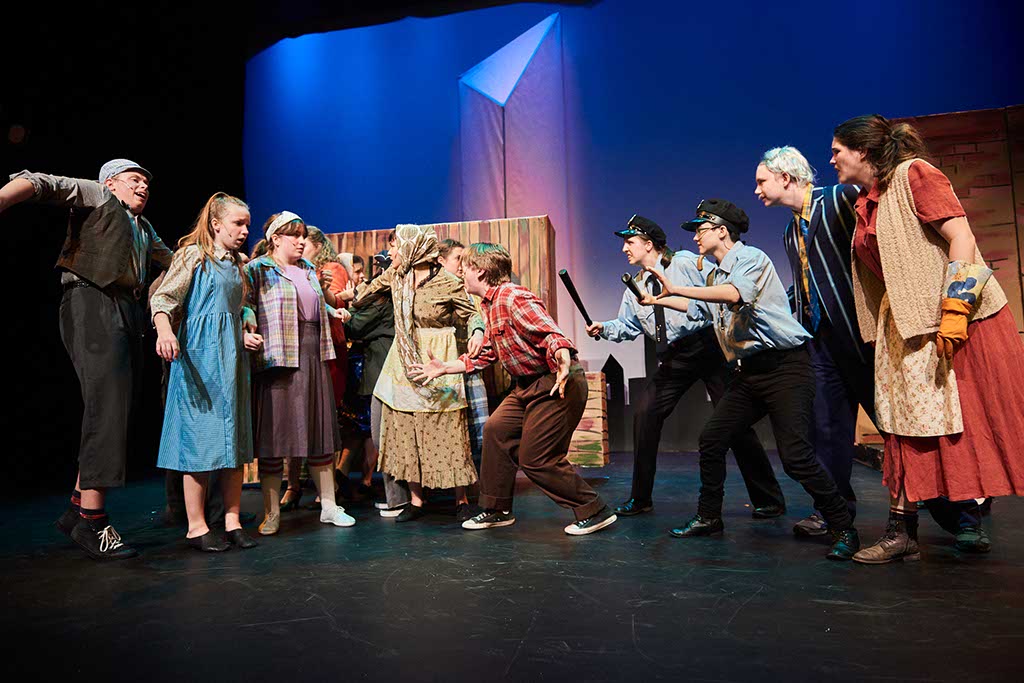 Urinetown is on stage at Waterfront for over a week. How do you wind down after a show?

A relaxing bath or shower.

Abby Holmes (McQueen, Ensemble)
“Music to stop the show from running around in my head.”

Vuk Prodanovic (Bobby)
“Relax and watch Paterson How destroy Skee Ball. He is so good at it. It’s a full packed day with Paterson How.”

More Behind the Scenes with the Musical Theatre Troupe at Rehearsals

About Urinetown, the Musical
In a Gotham-like city, a terrible water shortage caused by a 20-year drought has led to a government-enforced ban on private toilets. The citizens must use public amenities, regulated by a single malevolent company that profits by charging admission for one of humanity’s most basic needs. Amid the people, a hero decides that he’s had enough and starts a revolution to lead them all to freedom.