Sometimes, the people you meet when you’re young stick with you. For Susanne Moniz de Sâ, Junior Troupe Director and Coordinator of Theatre & Music, a connection made when she was at university led to something remarkable.

In 2017, This Is That, a CBC Radio One program, wanted to create a video to complement a story about ball-less soccer. Originally, the production team thought to get a regular kids soccer team to shoot the video, but then they realized what they were asking for.

“We’re actually asking the kids to engage and act. We’re asking them to perform,” says Lauren Bercovitch, Head of Production & Operations at Kelly & Kelly Creative, producer, and filmmaker. There’s a risk that the players wouldn’t understand why they’re not using a ball or get the joke. “They could not get a sense of what we’re trying to do with the whole production, as far as playing on camera, being good sports, and getting the irony of what we’re trying to do.”

At that point that the production team shifted gears: “We needed to find a group of kids who have some acting chops, who are into improv, and want to do this kind of thing and think it’s really cool, not just weird that we’re asking them to run around without a ball.”

And so Pat Kelly of Kelly & Kelly Creative, and host of This Is That and Road Trip Radio, made a suggestion. He’d gone to school with Susanne, and knew that she worked with young theatre artists at Arts Umbrella. Lauren got in touch, and the wheels were set in motion. Students from Arts Umbrella’s Acting for the Camera class were asked to take part in the video. 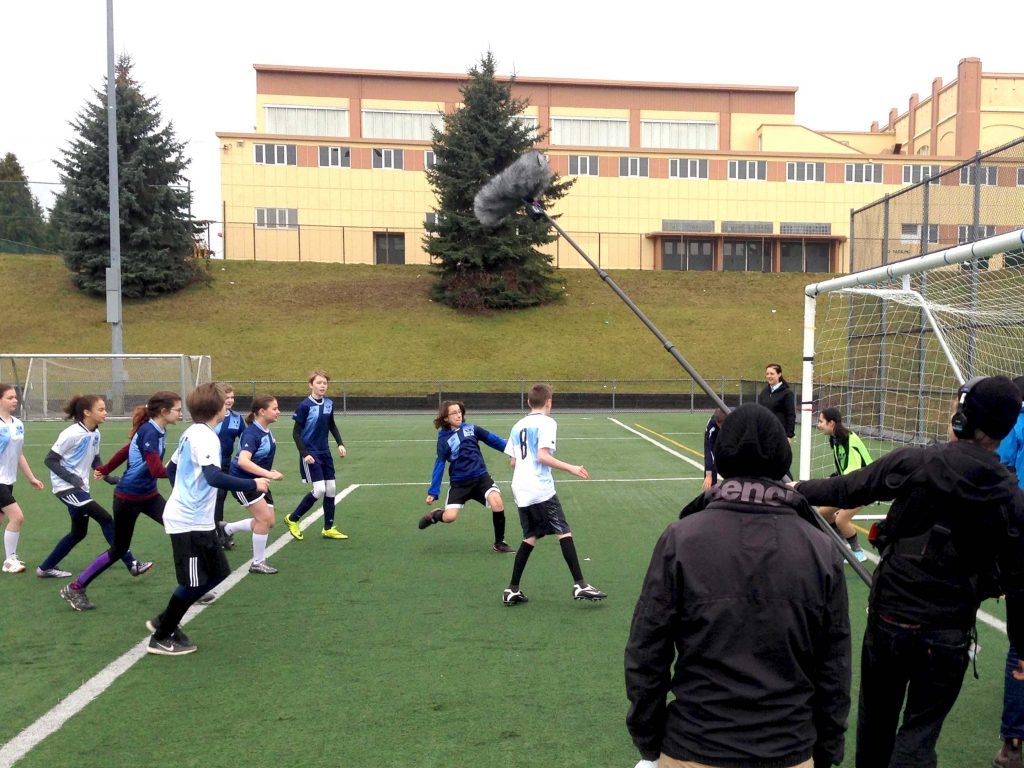 The day of the shoot called for rain, but the crew and kids lucked out. “The rain held off and everyone was amazing on set and super professional,” says Lauren about the kids and parents who joined them. Even though the shoot wasn’t a huge production—it’s a web video, not a scripted show—the kids got to experience being on a set: “Things like a call sheet that we sent to the families, what to bring to set, even the language of being on set,” explains Lauren. “They got to meet the cinematographer, the director of photography, and the directors.”

The successful experience on the ball-less soccer video kept Arts Umbrella in the producer’s sights. When they needed some kids’ voices for Kelly & Kelly Creative’s family-focused podcast, Road Trip Radio, Lauren knew exactly where to go. “It was important for us to have kids’ voices in a show that was aimed at kids,” says Lauren. They asked Susanne for some kids voices, and Arts Umbrella’s Junior Theatre Troupe stepped up to the plate.

On recording day, the kids were joined by Pat Kelly and Dave Shumka, who said everything went very smoothly. “In the finished product, my favourite part of the shows is hearing all the kids’ voices,” says Lauren. “It adds a real level of authenticity to the show.”

On the topic of pay, Lauren says they would never ask adults to do work and not get paid, so the same should extend to youth actors. “We definitely feel passionately about that,” she says. It’s the most realistic experience: a cold, rainy day, lots of standing around, payment. It’s different from being in a theatre classroom.

Moving forward, Arts Umbrella hopes to offer our students more paid opportunities. While Lauren couldn’t be specific, she says they’re planning more This Is That videos for 2018, as well as future seasons of Road Trip Radio. “Arts Umbrella has been a great resource for local kids who are keen [about acting],” says Lauren. “Pat, Peter, and Chris all come from an improv background, and there’s a difference between a kid who’s game to improv and a kid that needs to know their lines. It’s good for us to know that there are kids at Arts Umbrella in an improv class.”

Listen to the podcast