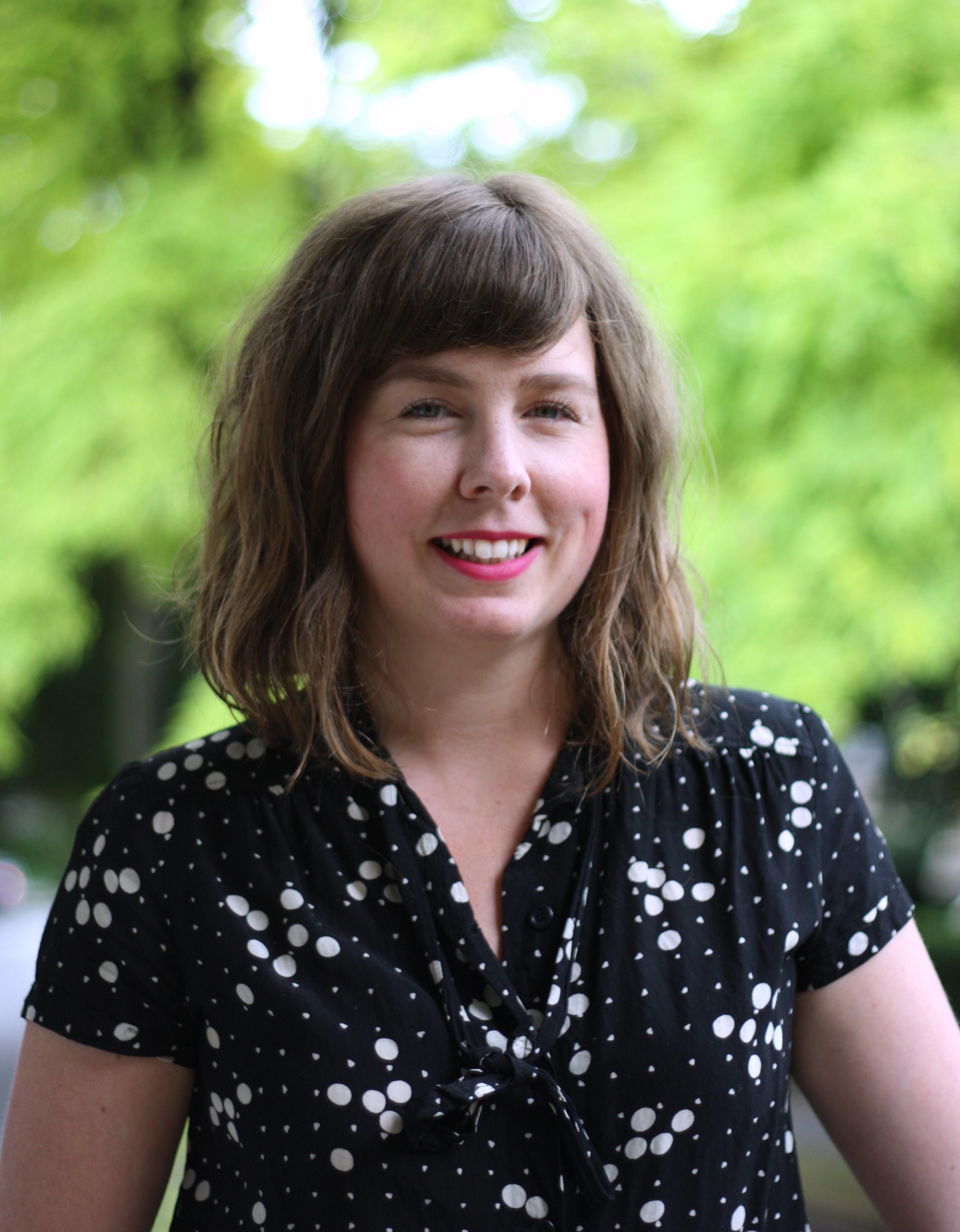 Kate Henderson says she would be a terrible archivist. Despite those words, she’s a successful—and organized—Program Manager at Capture Photography Festival, teacher, and volunteer, and she’s searching for time to work on her photography practice. An accomplished AU alumni, we took some time to catch up and get to know Kate a little better.

In the early 90s, Kate and her family moved across country, from Toronto to Vancouver. Immediately her parents signed Kate up for ballet at Arts Umbrella, under the tutelage of Artemis Gordon. Two years later, Kate formed an interest in the visual arts, and started taking Drawing & Painting with Marta Roberston Smythe, and Clay Sculpture with Suzy Birstein.

The drive to create runs strong in Kate’s family. “My dad is a professional musician, arranger, and composer,” she says. “My mother is a professional actor and singer. I was raised in a creative household where [art] was really encouraged.” Her parents have had an incredibly positive influence on her. In the early 1960s, Kate’s mother chose to pursue a career in acting when many women her age were settling down and having children. Kate’s father ran a production business for many years, but his dream was always to produce a solo album—he has released several within the last few years. They’re working artists, finding their way in the world.

After receiving a degree from Emily Carr University, Kate took a bit of time off before pursuing her masters of fine arts at UBC. “As much as I wanted to be an artist and creative, I also knew that I needed to feel stable to be happy. So I pursued an MFA, because I knew that would help me with teaching and future job opportunities,” says Kate.

Kate has taught numerous analog photography classes at Arts Umbrella and Emily Carr, where she also designed and taught two sessions of a third-year Projected Imagery class in the Photography Department. She’s also led several workshops over the past few years. One, a one-day chemigram workshop during the Capture Photography Festival in 2017, engaged a group of teens in camera-less photography. “The process uses chemicals, natural light, and salt. I think it’s really important for students of this age to see how photography is so embedded in chemistry and science,” explains Kate. She’s also taught workshops for ArtStarts, and received an Emerging Artist Creative Spark grant to do so.

Beyond teaching, Kate has also worked in the Curatorial Department at the Vancouver Art Gallery (VAG), and is now the Program Manager at Capture Photography Festival. While her first role at the VAG was largely administrative, she was given the opportunity to see and help out with some of the curatorial operations. Later, as a Touring Exhibition Assistant, she coordinated tours across the province and internationally, making connections with galleries all over the world, and put together proposals and packages for museum services. “That was a huge learning experience for me because I got to learn about the mechanics of a tour,” says Kate. “Exhibitions don’t get installed magically. There are many people involved, and a lot of steps.”

Access Gallery is lucky to call Kate President of their Board of Directors. For the past four years, she has helped with for strategic planning, governance, and working with the Director/Curator and the transition to a new D/C.

In a perfect blend of her talents, Kate now oversees the Vancouver branch of a project at Capture, and founded by the Magenta Foundation, called the Flash Forward Incubator Program. “I’ve had the opportunity to visit many Vancouver high schools and talk to teens about photography, exhibitions, and the Festival,” says Kate. The project culminates in a professional exhibition, catalogue, and a silent auction—the proceeds of which are funneled back into the schools.

Part educator, part arts organizer, Kate is also part artist. While she took plenty of photos during her degree at Emily Carr, Kate says her practice is more focused now. “I’m more interested in the medium itself, and how it’s changed, historically, and how film and digital have crossed over in the time we’re in now,” she says. She works in both film and digital photography, but also uses internet-sourced images in her work. “There are so many images readily available in this world that are more interesting combined than something I could create brand new. I’m also interested in archival images from instructional manuals and magazines, and vintage educational pieces.” Maybe she’s not an archivist, but she’s a friend to the images found there, breathing new life into them.

While Kate does rent a studio space in Vancouver, she says it’s a bit of a conundrum in this city right now. Working multiple jobs is par for the course for many emerging artists, but you face the irony of working so much that you have no time for your studio. The picture of the solo artist creating in a studio all day, every day isn’t always a realistic one. “That’s kind of an old-fashioned, antiquated way of being an artist,” she says. “The production of work doesn’t always happen in studios anymore. It can happen in everyday life, in collaboration with someone, on the internet, or on your computer from just about anywhere.”

Studio spaces can also serve multiple purposes. Kate goes there just to think, write, and unwind. Sometimes, she’s not working on a specific project: “It’s really helpful to take photos of works in progress, and look back on them,” says Kate, “Sometimes, I think of those little piecemeal photographs as the work itself. There’s so much emphasis on the final product and being productive, [but] what does productive even mean? And why is it so important in this world?” We have an obsession with being productive and see value only in the amount that is completed. Yet slowing down, taking something step by step, can be rewarding. “I know a lot of artists that don’t produce more than one or two pieces a year.”

And yet, looking at Kate’s CV, it’s clear that she’s keeping on top of a number of jobs and projects. “It takes persistence and diligence around your practice,” she says. “And just working really hard.” Kate relies on deadlines to keep her on track: deadlines for grants; deadlines for applications and for proposals. “I’m good with deadlines. I can’t just show up at the studio and laze around and magically think of great ideas. I need to have a deadline and a set of guidelines in order to get anything done.” She also says having a job helps to keep her on track. “It helps me to make connections in the art world, and I’m lucky that my job allows me to work on some creative projects.”

In her practice, Kate also preaches organization. After she found out that an old friend would be visiting and wanted to do a studio visit, Kate was spurred to organize her portfolio. “I went through all of my files on my computer, and made a portfolio by year,” she says. Though she found it an incredibly exhausting task—“I’m really good at organizing other peoples’ lives and work things, but when it comes to my own I’m like, ‘nah’”—but she did it; she laid it out; she stuck to her deadline. She included her exhibitions, ideas, writing, presentations, and teaching syllabi. And now she just has to make updates.

Kate’s other advice? Get writing. “Writing is hugely important,” she says. “You have to be able to write about your work in a clear and succinct way, and believe it or not, if you want to be an artist you also have to be an academic of some sort. Pursuing my MFA at UBC helped me so much with my writing and confidence in my work.”

Although Kate says her practice has been on a bit of a hiatus while she’s focused on other aspects of her career, she has plans for what could come next. Since she’s never done a residency outside of Vancouver, that’s pretty high on her bucket list. “I’d like to do the classic Banff residency at some point,” she says. “It’s close by and they are couple- and family-friendly.” She would also love to do something on her own sometime, or a collaboration with her partner who is a sound artist and audio engineer.

At 33, Kate says building a family is also on her mind. “It’s in the near future of planning,” she says, “which will throw a wrench in everything.” But she definitely doesn’t see it as something that will hold her back from pursuing her passions. “My mom didn’t let her life shut down. I saw that, from experience. She still worked. She still did what she wanted to do, and was a great mother and female role model.” Her parents and friends are great influences for seeing that you can do both. The proof is in the archives of her life.