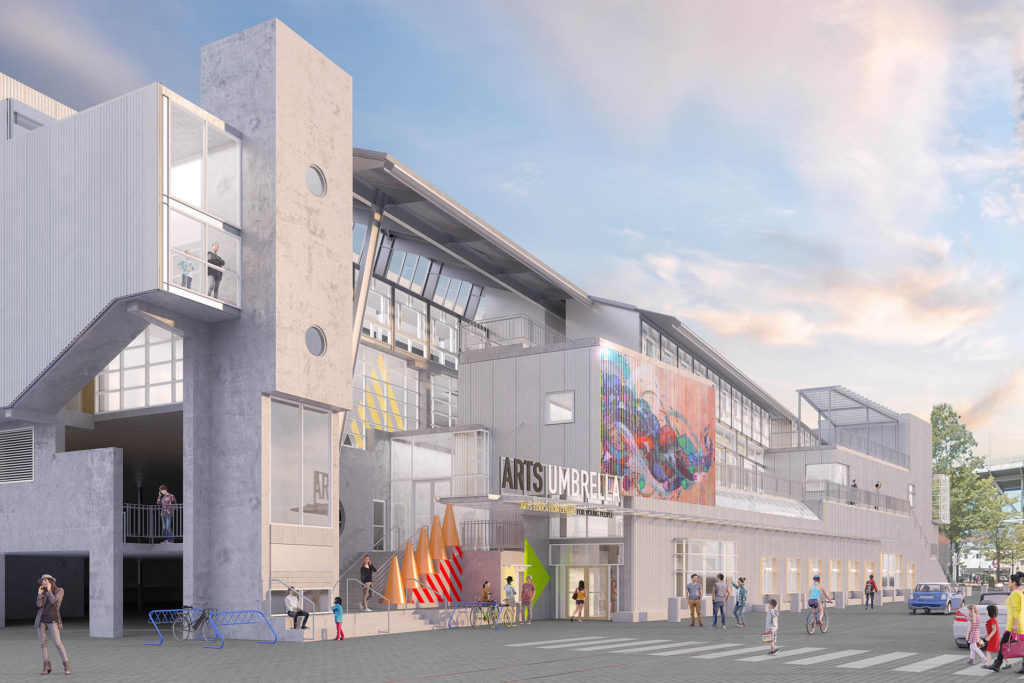 Arts Umbrella reaches more than 24,000 young people every year, with more than 80% served through bursaries, scholarships, and donor-funded programs.

Vancouver, B.C. (January 28, 2021): Arts Umbrella is proud to announce the opening of its brand-new arts education facility in April 2021, situated on Granville Island, Vancouver’s arts and culture hub. The 50,000 net-square-foot space more than triples the organization’s current space, providing children and youth with expanded programming and studio spaces and, for the first time ever, welcoming the public to on-site performances and exhibitions presented by young people in art and design; dance; and theatre, music and film.

Arts Umbrella’s new home will serve as a model for arts education across North America, significantly increasing the non-profit’s capacity to work with school boards, community centres, and neighbourhood houses to provide transformative experiences for vulnerable young people in our community. The organization currently reaches more than 24,000 young people across Metro Vancouver annually and, within the next 3-5 years, the new core facility will reach approximately 15,000 children and youth each year through tuition-based programs and performances, as well as community programs, distance learning, bursaries, and scholarships.

The building will house six spacious dance studios; four theatre, music and film studios with specialized technical and audio equipment; 10 art and design studios, including state-of-the-art media labs and a photography darkroom; a 132-seat theatre; a public exhibition space; and a dedicated workshop area for woodworking, stagecraft building and general fabrication that will enhance capacity to train future industry professionals.

“As Canada’s leading non-profit arts education organization for young people, we are inspired to significantly build on the legacy that Arts Umbrella has built over the last four decades,” says Paul Larocque, President & CEO of Arts Umbrella. “Over the past few years, our staff’s hard work, innovations, and programming requirements have steadily pushed against the boundaries of our current space. Now, we have room to support and inspire more young people, proving that creativity really can be limitless.”

Arts Umbrella was founded in 1979 as a community-based organization that opened to 45 students on Granville Island. In 41 years, the non-profit has expanded to locations across Metro Vancouver, serving more than half a million young people. Close to 200 artist-educators help young artists unlock their passion for the arts, empowering them with essential skills such as creative thinking, confidence, and compassion – traits that support resilience and strength, particularly in tumultuous times such as COVID-19.

“It is incredibly gratifying to see Arts Umbrella evolve from a small grassroots effort into such an impactful organization for young people,” says Arts Umbrella co-founder, Carol Henriquez. “We started Arts Umbrella to ensure young people from all socio-economic backgrounds could access the arts, and seeing that vision expand to touch half a million students is truly special. We couldn’t have achieved this without our incredible team and support from the government, our partners, and the community. Thank you, from the bottom of our hearts.”

In recent years, demand for Arts Umbrella programs has increased significantly. In November 2017, the Province of British Columbia confirmed the organization would move into the former South Building of Emily Carr University of Art + Design. In March 2018, the Department of Canadian Heritage announced $7 million in funding to support the new facility, with the Province contributing an additional $1.4 million. To date, Arts Umbrella has secured close to $33 million towards its capital campaign and endowment fund goal of $37 million. Construction and renovations commenced in January 2019, and the grand opening is slated for April 2021.

The initial building design was completed in 1995 by award-winning architecture firm Patkau Architects, with the current repurposing led by Henriquez Partners Architects and consultants BTY Group (project management); ITC Construction Management Integral (mechanical); Glotman Simpson (structural); Nemetz (electrical); DWD (theatre design); and BKL (acoustical design). The facility will prioritize the ongoing safety of staff and students with state-of-the-art engineering and retrofits, including an AtmosAir ionization system that naturally filters pollutants from the air. Once opened, the building promises to create new excitement and energy on Granville Island, complementing and amplifying the artisans, artists, theatres, and small businesses who make the Island a nationally recognized hub for arts and culture.

About Arts Umbrella
Arts Umbrella is where young artists ages 2–22 cultivate their creativity in Art & Design, Dance, and Theatre, Music & Film. As a non-profit centre for arts education, they believe that art is powerful. Powerful enough to change childrens’ lives in incredible ways. When young people connect with the arts, they gain self-confidence, develop self-discipline, and discover creative expression—qualities they carry with them for life. Arts Umbrella has four locations in Vancouver and Surrey, as well as donor-funded programs at schools, community centres, neighbourhood houses, and healthcare facilities across Metro Vancouver. The organization reaches more than 24,000 young people every year, with more than 80% served through bursaries, scholarships, and donor-funded programs.
artsumbrella.com | thenewlimitless.com